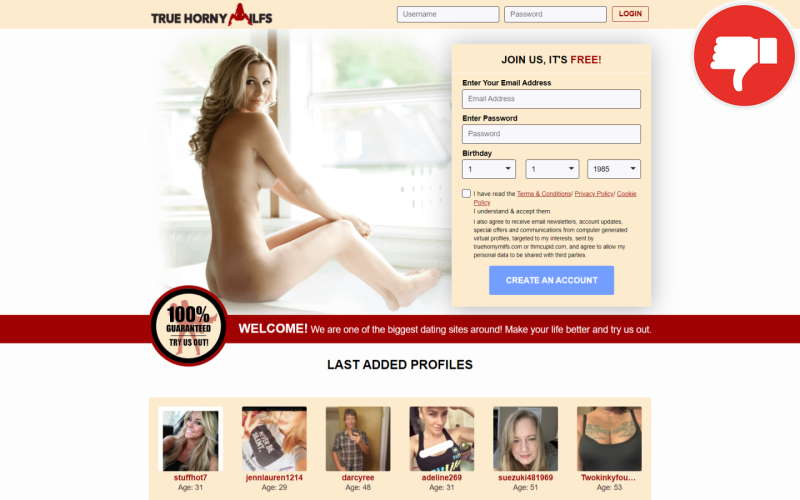 So, users have the chance to spot the note about moderation before registration. Anyway, there is more to note. Costs will occur for a premium membership that will continue until users actively cancel it. That is used as a subscription rip off, according to information on the internet. The operator of the site is Safe Escape Ltd, which is based in Guernsey.

Scroll down to read the details of our TrueHornyMilfs.com review.

Details on the TrueHornyMilfs.com review

The online dating portal TrueHornyMilfs.com has got a solid first impression. On the landing page, we read some general information about the offer on the site. Also, we see some erotic content on the landing page. It seems that this platform is a casual dating platform. The homepage contains a few details about the members´ pool. Here, the community appears to be open-minded. Plus, the number of members is high as well. Of course, that does sound great. But, there appears to be a problem. This site uses computer-generated virtual profiles. So, the profiles of the site are not real.

This site is a moderated chat

TrueHornyMilfs.com claims to have a lot of members. Well, the site might have a lot of profiles, but they are not real. The profiles on the landing page and in the members´ pool are fake and controlled by bots. This is not a dating site, but an entertainment service. Now, that is not the result of a lot of research. On the landing page, we found a note about computer-generated virtual profiles. So, this site is a moderated chat. For now, we are not sure if we can call it a scam because of that. So, we started our research.

On the internet, we found many negative reviews. Former users do explain that this site is a rip-off with fake operators. Their point of view is reasonable. First of all, the note on the landing page does not explain the full scale of the scam. The note is not hidden, but it is not suggested that all profiles are fake. Also, the site advertises hot adventures, which sounds like casual dates.

5.1. Notwithstanding the foregoing, by and throughout your use, access and interactions to and with the Services and related content, You may interact with content generated by, or with the assistance of, automated online accounts (“Bots” or “Automated Profiles”), where none – or substantially none – of the actions and posts of that Automated Profile are the result of or arise in connection with, a natural person’s profile or otherwise User Content.

The computer bots will make the first step and animate actively to a chat. While doing that, they will not send any notifications about moderation. As we see it, we can call this site a scam with a fake chat. In the legal information, we found a note about the entertainment purpose of the site. The operator explains that the goal is entertainment, but not actual dates. In general, entertainment is a common synonym for a fake chat. However, the actual purpose of moderation is to increase the income for the operator.

On the internet, we found a lot of reviews about the site. Of course, former users were disappointed by the actual service. They assumed that many casual dates could be found here. In the end, you will pay a lot of money to chat with fictional profiles that are managed by bots. Also, former users note a subscription trap.

According to the information on the internet, the subscription for the premium membership will continue if the user does not cancel it in time. That is used as a trap by simply ignoring or declining terminations. That is the experience of former users.

The conclusion from our TrueHornyMilfs.com review

TrueHornyMilfs.com is a rip-off with a subscription trap and a fake chat. The profiles on the homepage and in the members´ pool are fake. Those fake profiles are controlled by bots. The bots will start a chat but won’t note anything about moderation. This way, users will be animated to make a purchase which will end in a cheeky trap.

Let us know your TrueHornyMilfs.com experience in the comments as well.