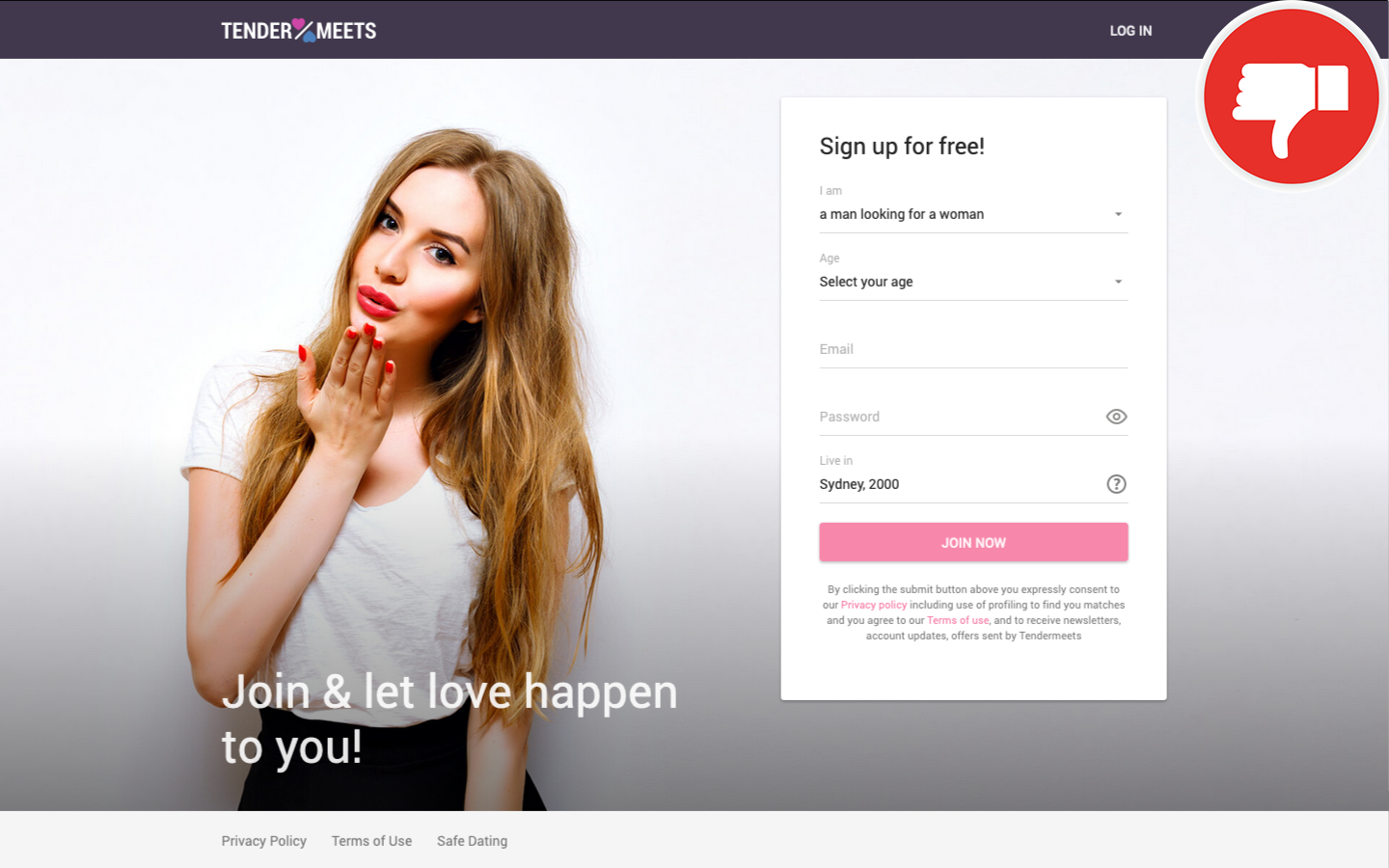 TenderMeets.com advertises with a free registration but does not inform about costs which arise later. That is not the only misleading thing made up by the operator of the site Porticato Media Ltd., located in London, UK.

The online dating website TenderMeets.com is a scam with a subscription trap. Right after the registration process is done, costs will appear for a premium-membership. This is offered in form of a subscription. That subscription will extend automatically, if it is not terminated in time. Usually that does not have to be a trap. However, in this case it is used to trap the user.

Scroll down to read the details of our TenderMeets.com review.

Details on the TenderMeets.com review

The online dating website TenderMeets.com looks good on the first view. On the landing page we read some general information about the site and its offer. The offer does sound good. We read about a free registration and a lot of members that are active and open-minded. Actually, this portal appears to be a good choice to find a match in Australia. We see some profile pictures on the landing page that give us the impression that the members of this site are quite young. The site is easy to use, secured with modern solutions, plus it is possible to find love here. At least that is what the landing page tells us. We also see the advertisement which says that this site is the hottest dating site in Australia and that you will find your life partner here.

TenderMeets.com advertises with a solid offer. But in the end, the online dating portal is nothing else but a cheeky rip-off. The site is a subscription trap. We also read some reviews that claim that the members’ pool is filled with fake profiles.

This site has got a bad reputation

Former customers claim that the site is filled with fake profiles and that those fake profiles are managed by fake operators. Those fake operators will get in touch with a new member right after the registration. They will send many messages to the new user, which the user cannot open or read. To read and to send messages, a paid premium-membership is needed.

As mentioned before, the fake chat is not mentioned by the operator of the site. But many former customers describe this portal as a moderated chat. The user gets triggered to get a premium-membership which is offered in form of a subscription. That subscription will extend automatically, if it is not terminated in time. The deadline for termination sounds fair at 14 days, which is noted in the terms and conditions. Anyway, the portal is a scam with a subscription trap.

Bad reviews on the internet

We also found some reviews that mention a trial membership. That kind of membership is the trap. We also checked the operator of the portal for trustworthiness. Unfortunately, we only found reports that speak very negatively about Porticato Media Ltd. located in the UK.

We did some research on the internet about the site and the company that runs TenderMeets.com. Many former customers claim that the site is a fake chat. More people point out that the premium-membership subscription is a trap. Additionally, the operator of the site has got a bad reputation on the internet. The company runs a whole network of such sites that are all a rip-off.

To cancel your subscription, please send an e-mail to the customer support: [email protected]

The conclusion from our TenderMeets.com review

The online dating website TenderMeets.com is a rip-off with a subscription trap. Many former customers claim that the site is also a fake chat. According to that information, the members’ pool is filled with fake profiles that show fictional people. Fake operators manage those fake profiles to entice the user to spend money. A date with another user of the site will never happen.

Let us know your TenderMeets.com experience in the comments as well.