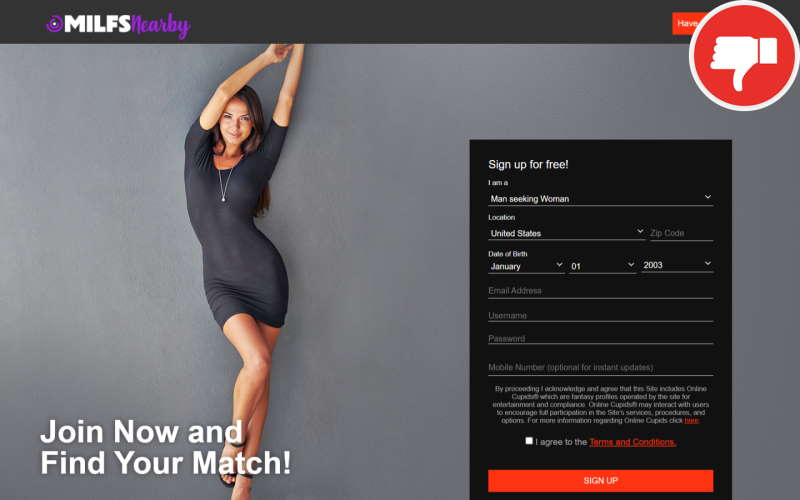 MilfsNearby.com advertises with free registration. Afterwards, high costs are incurred for premium-membership. But misleading information is not the worst aspect of this portal. Our research also shows it is a scam. Profiles are fake and controlled by phoney chat operators. Furthermore, the subscription will end in a cheeky trap.

Costs will arise from a subscription that will extend automatically. Normally this is not a problem. But here automatic renewal is used as a trap. We found a lot of reviews on the internet alleging a subscription rip-off. Former users’ experience was that premium-membership is hard to cancel. The site operator is MilfsNearby, California, USA.

Scroll down to read the details of our MilfsNearby.com review.

Details on the MilfsNearby.com review

MilfsNearby.com offers free registration. Moreover, the online dating portal’s appearance is solid. We might assume this is a legit choice. But our research shows this impression is completely wrong. The chances of meeting a real person on this site are low to zero. All site profiles are fake and controlled by fake chat operators. This portal is ‘for entertainment only’, which is a euphemism for moderation. In this context, this means the portal is a scam using fake chat. A fake operator controls fictitious profiles that encourage members to chat.

During the conversation, a fake operator will not admit to being a fictitious person. Moreover, their fake profiles are not marked as such. In a nutshell, users are either unaware of moderation or do not realise its full extent. On the landing page, we read a note about fictional profiles and their ‘entertainment purpose’. Fake chat operators are styled ‘online cupids’. Well, this admission on the landing page is a positive aspect of the site. But it’s the only one we can report. During our research, we found a lot of negative reviews of this site.

The following is stated in the terms and conditions:

THIS SITE USES FANTASY PROFILES AND MESSAGES CALLED: ONLINE CUPIDS®”: You understand, acknowledge, and agree that some of the user profiles posted on this site, may be fictitious and operated by the Site or its contractors,

We found a lot of negative reports on the internet. These show most former users failed to spot or understand the note about fictional profiles on the landing page. Moderated chat is, however, further explained in the legal information. There we found details of its true purpose. In reality, fake operators manage fictitious profiles not for users’ entertainment but to increase the operator’s income. Costs arise from a subscription, which will end in a scam.

We found a lot of reviews on the internet referring to a rip-off with a subscription trap. Costs are incurred for premium-membership, which renews automatically if the user fails to terminate it in time. This procedure is actually a common feature of dating sites, but here it is used as a trap. In the experience of former users, the site operator makes termination difficult. Membership will simply renew over and over again.

An imprint is missing; consequently, we were unable to find full contact information for the operator. We know the company is located in California, USA, as California state law applies to this site in relation to the terms and conditions.

The conclusion from our MilfsNearby.com review

MilfsNearby.com is a rip-off with a subscription trap and fake chat. Site profiles are phoney and show fictitious people. Fake chat operators control these fictitious profiles to encourage new members to chat. To reply, premium-membership is needed, which will end in a trap. The site operator makes the termination difficult.

Let us know your MilfsNearby.com experience in the comments as well.