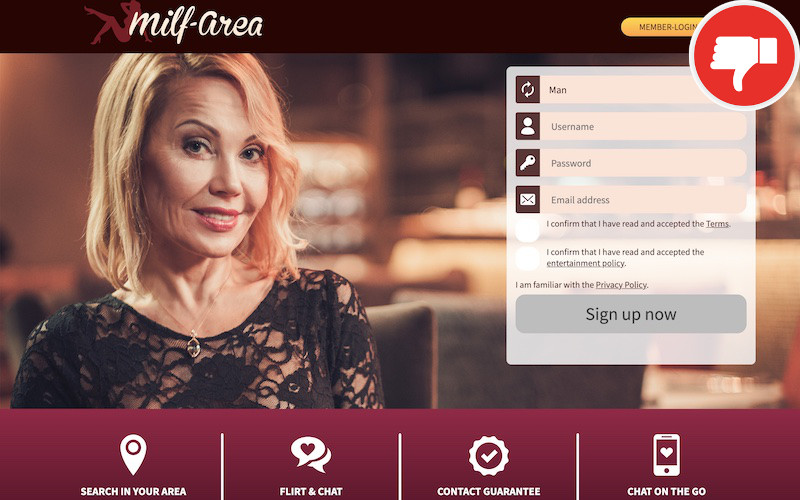 Even so, the note is hidden at the bottom of the landing page. Plus, it does not explain the full scale of this scam. All the profiles in the members’ pool are fake. “Fake chat” operators manage these fake profiles. They do not entertain users. Their purpose is simply to increase the income of the operator. The operator of the platform is Casual Networks BV, which is based in Venlo, in the Netherlands. We found many negative reviews about the site and its operator.

Scroll down to read the details of our Milf-Area.com review.

Details on the Milf-Area.com review

The online dating portal Milf-Area.com looks like a solid choice. It has a modern and appealing design. On the landing page, we see an image of a mature woman. There, we also see the screen for registration, which is free.

Additionally, the process of creating a profile is simple and can be done within a few minutes. In just a few minutes, you can meet other singles and chat. In regards to the information on the landing page, the community is friendly and open-minded. The users appear to be very chatty. So, it should not take too long to find a match.

Milf-Area.com advertises with an interesting offer. However, we did some research on the internet. We also checked the portal’s legal information. It did not take much of an effort to spot the rip-off. At the bottom of the landing page, we found a short notification about fictional profiles. The platform uses fictitious profiles for the entertainment of users. Well, it is a positive aspect that this important note is provided on the landing page. It is well-hidden at the very bottom of the page. As we see it, the website is a fake chat scam.

The website’s goal is not user entertainment. A fake operator will animate new members to a chat. However, they will not identify as a fictional person. In the legal information, we found an extensive explanation. There we read about a certain mark for fake profiles. They seem to be marked a fake. Still, there is a huge problem. The mark itself does not contain any information. If a user did not read the terms and conditions, its meaning would remain unknown. A fake profile is marked, but the mark does not make a change.

5. CN shall use profiles created and operated by CN on the portal for marketing purposes, improving service quality, for presenting the message functions and for entertainment. The aforementioned are defined with “(c)” or a star in the system. Actual meetings/dates are not supported by this profile. The users are only able to send messages within the scope of the portal. Sending messages through the electronic mailbox requires a registration for payable services.

Fake profiles in the members´ pool

The goal is to increase the activity of users, which lead to more cost. A user has to pay to use the site. Costs will ensue for credits that are needed to send messages. Fake chats are used to increase the income of the operator. Regarding the reviews, former users do not know about the fake chat.

A member pays a lot of money to chat with a fictitious profile. Each sent message is a waste of money. According to the experience of former members, the chance of finding a real match is zero. The members´ pool is filled with fake profiles.

Milf-Area.com has a bad reputation on the internet. Former users speak of a cheeky rip off. Their reviews point out that most members did not spot the note about entertainment on the landing page. They also explain how the rip-off works. It starts right after registration. Within just a few minutes, the virtual post box fills up with messages. All messages come from “fake chat” operators. They will not mention anything about entertainment. According to the experience of former users, the rates of sending messages is quite pricy. Of course, it is a waste of money.

To delete your profile and terminate your membership, please contact the customer support.

The conclusion from our Milf-Area.com review

Milf-Area.com is a scam with a fake chat. The profiles on the landing page are fictitious. Also, the profiles in the members´ pool are fake. A fake profile shows a fictional person with which a date in real-life is impossible. On the landing page is a short note about entertainment purposes. However, this note is hidden and does not reveal how entertainment is given through fake chats. The goal is to increase the income of the operator by luring users into buying subscriptions.

Let us know your Milf-Area.com experience in the comments as well.