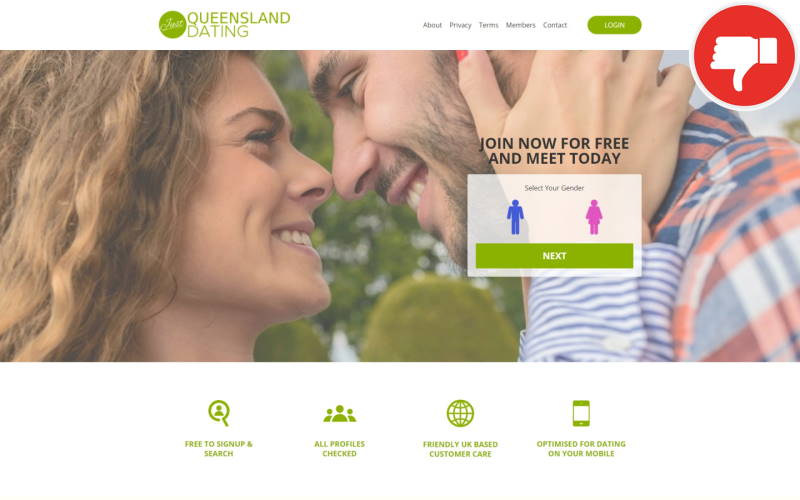 The name of the dating site should already tell you what JustQueenslandDating.com is supposedly all about. The site also advertises with a free registration. JustQueenslandDating.com was created for singles living in the Australian state of Queensland. But the operator of the site is based in Slough, in the United Kingdom. Venntro Media Group Ltd, is a scam company known to many. The English operator creates fake profiles to trick the users. This is done to get hold of their money.

The usage of fictive profiles is a well-kept secret, which is what enables the scam in the first place. The users must purchase a full membership or virtual credits to unlock the chat function. They mostly only do so because they are convinced that the other members are real and looking for a flirt.

Scroll down to read the details of our JustQueenslandDating.com review.

Details on the JustQueenslandDating.com review

We like the professional design of the landing page. Unlike other Australian dating sites, JustQueenslandDating.com wants to be a bit different and focus on helping singles in Queensland. The operator also mentions that this site shares its member base with other dating sites, which makes up a shared network. This means that your profile appears elsewhere as well, even on sites that have nothing to do with Queensland. It does not actually matter where the other members are from. Many of them are fake and created by the operator as part of a rip-off.

The fake profiles are not mentioned as such, but there is a statement in the terms and conditions that talks about the members concerns, and messages that are not genuine. Furthermore, JustQueenslandDating.com is an “entertainment” service. Dating sites which use fictive profiles often refer to themselves as entertainment services. As a user you do not want entertainment, you want dates.

This statement can be found in the terms and conditions

The Site is an entertainment service. Your use of this service is entirely at your own risk […] By using this service you accept that any member profiles, messages and communication may not be genuine.

How the operator tries to trick you

The use of fake profiles can be explained using the chat system of the site. Users are required to purchase credits and redeem them to send messages. The combination of fake members and an expensive chat is common on scam dating sites. Alternatively, the users can purchase a full membership and pay a monthly fee for greater access to all features. If you do not cancel this membership at least 72 hours prior to the end of the term, it renews automatically.

Although memberships that renew automatically are used by legit dating sites as well, JustQueenslandDating.com appears to be a subscription rip-off. Numerous unsatisfied users share their negative experiences with the company which runs this site. Venntro Media Group Ltd from Slough, in the United Kingdom, is not only known for its use of fake profiles, but also for constantly charging the users more money than they should.

The conclusion from our JustQueenslandDating.com review

We must admit that the well-designed landing page makes it seem that JustQueenslandDating.com is a professional and trustworthy dating site. However, if you browse the web for user reviews about Venntro Media Group Ltd, the company running this site, you should already be alarmed. The English operator uses fake profiles to advertise the paid services, such as the chat. The full membership especially, can become quite expensive.

Let us know your JustQueenslandDating.com experience in the comments as well.