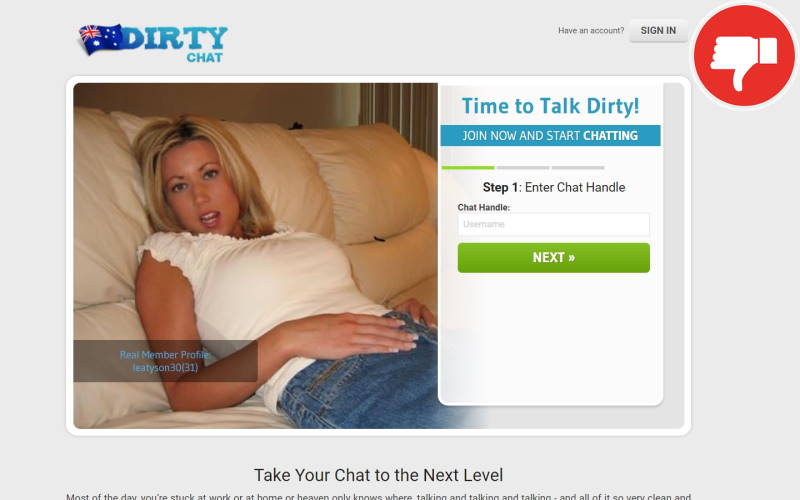 DirtyChat.com.au advertises with free registration and claims that you will have a lot of fun here. It is possible to chat with other members, but we are not sure if the members are real. On the internet, we found many reviews about a scam with a fake chat. Former users had a bad experience with this site.

Costs will occur for a premium-membership which will extend automatically if it is not cancelled in time. That does not have to be bad. But on this site, a trial membership will be offered which appears to be a subscription rip-off. It cannot be terminated in time. It is a trap. The operating company is Infinite Connections Ltd.

Scroll down to read the details of our DirtyChat.com.au review.

Details on the DirtyChat.com.au review

The dating portal DirtyChat.com.au looks like a reputable choice. On the landing page, we read about free registration and the general offer of the site. Everything sounds convincing. We read that you take chatting on the next level here. That sounds good, but what about meeting each other? We did some research on the internet and found a lot of negative reviews about this site. But we found more negative reports about the operator of the portal. In general, their reputation is not good. This company is well-known on the internet.

This website is operated by Infinite Connections Ltd who are based in Greater London, UK. We know this company already. We have reported a few times about some of their other sites. This platform is just one of many. According to the information on the internet, this website is a fake chat and a subscription trap. The profiles are fake and controlled by fake chat operators. They will lure new users into a chat for which costs will occur. However, proof of a fake chat scam is missing. Fake operators or fictional profiles are not mentioned in the legal information.

Do not register on this site

Even if we cannot prove a fake chat, we must point out one thing. The reviews by former users sound very similar, so this makes them more reliable than a well-known scamming operator. However, there is more. First, many reports criticise the lack of data protection. The operator will share your personal information on all sites in the network. Plus, costs will occur for a premium-membership that will extend automatically, if it is not terminated in time. That is not a problem, in general. But it is not possible to cancel the trial membership in time. This is a trap.

The conclusion from our DirtyChat.com.au review

DirtyChat.com.au is a rip-off with a subscription trap. We also found many hints about a fake chat. According to the information on the internet, the profiles are fake and managed by fake chat operators. The operator of this site has a bad reputation because of a lack of data protection. Plus, the automatic renewal is used as a trap. It is not possible to cancel the trial membership in time.

Let us know your DirtyChat.com.au experience in the comments as well.