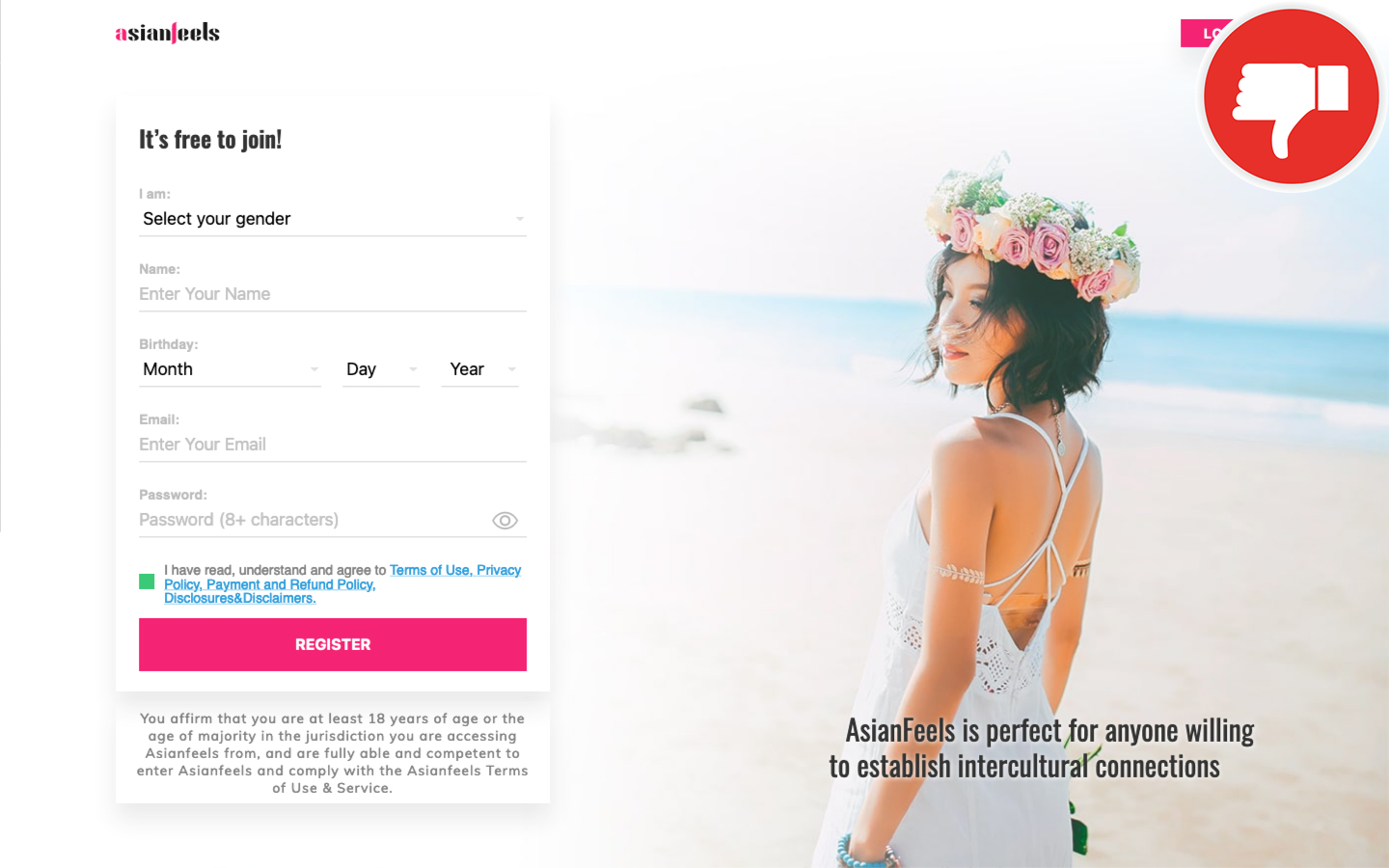 AsianFeels.com aims for a certain target group. Here, people can register who are looking for Asian women. But it does not matter if you like women from this region or not. This website does not have real members, only fake profiles. We also did some research on the internet and found many negative reviews. The case is clear that this online dating portal is a scam.

All profiles on the site are fake and show fictional people. It is not possible to meet a real person here. Fake chat operators control the fictional profiles for the “entertainment” of customers, or as we see it, to scam them. They will persuade new users to spend money on “credits” which will top up automatically. The operator of the site is AsianFeels, who are based in Limassol, Cyprus.

Scroll down to read the details of our AsianFeels.com review.

Details on the AsianFeels.com review

AsianFeels.com appears to be a good choice. This portal is for a certain target group. If you like Asian women, this portal seems to be a good choice, according to the advertising. On the landing page, we read some general information about the site, and we see an Asian bride. We know that the registration is free for everyone. Plus, the process of creating a profile is as easy as pie. So, in a short time you can find an Asian match. Additionally, we found notes about an extensive membership. So, we will become part of a huge dating network.

The offer of this online dating portal AsianFeels.com sounds good. One good sign is that the operator shows information about costs on the landing page. There we also read about an extensive network. That means, this is not the only website run by this operator. It is part of a huge network. This sounds great, but it turns out that the website is a rip-off. We found hints about a fake chat. In general, the reputation of the website on the internet is bad. We read about fake profiles that are not marked as such.

The fake profiles seem to be controlled by fake chat operators. We must mention that we did not read about fictional profiles or fake chat operators in the terms and conditions. But we found another note which might stand for that. This website is for “entertainment” only. That does not sound like a cheeky fraud but is an often-used synonym for a fake chat. So, the operator of the site is on the safe side of the law. But the user still does not know about moderation which makes it a fake chat. Plus, costs will occur.

We found the following note in the disclosures

Any statement that may be posted on the Service is for informational and entertainment purposes only and is not intended to replace or substitute for any professional financial, medical, legal, or other advice.

This site is not worth your time and money

It starts right after the registration. First, a new member receives a free basic-membership. Second, a new member receives many messages from other profiles. To reply to the messages, costs will occur for “credits”, which are needed to send messages. A basic-membership does not allow anything. So, the purpose of moderation is not entertainment. It is used to increase the income of the operator. This automatic top-up can also be used for a subscription trap.

We did some research on the internet. We found many negative reviews. Altogether, we can point out that the website has a bad reputation. “Entertainment” is a synonym for a fake chat, but not the best proof. However, the experience of former users was always the same. In all reviews, we read about fictional profiles which appeared to be moderated. Fake chat operators simulate users into a chat for which costs occur. Every sent message costs a lot of money.

The conclusion from our AsianFeels.com review

AsianFeels.com is a scam with a fake chat. The profiles on this online dating portal are all fake and controlled by fake chat operators. The operator mentions this website is for entertainment only. But the service costs a lot of money. Plus, users do not seek entertainment, they want a dating service. So, here you will be tricked by misleading advertising and lured into a rip-off with a fake chat.

Let us know your AsianFeels.com experience in the comments as well.