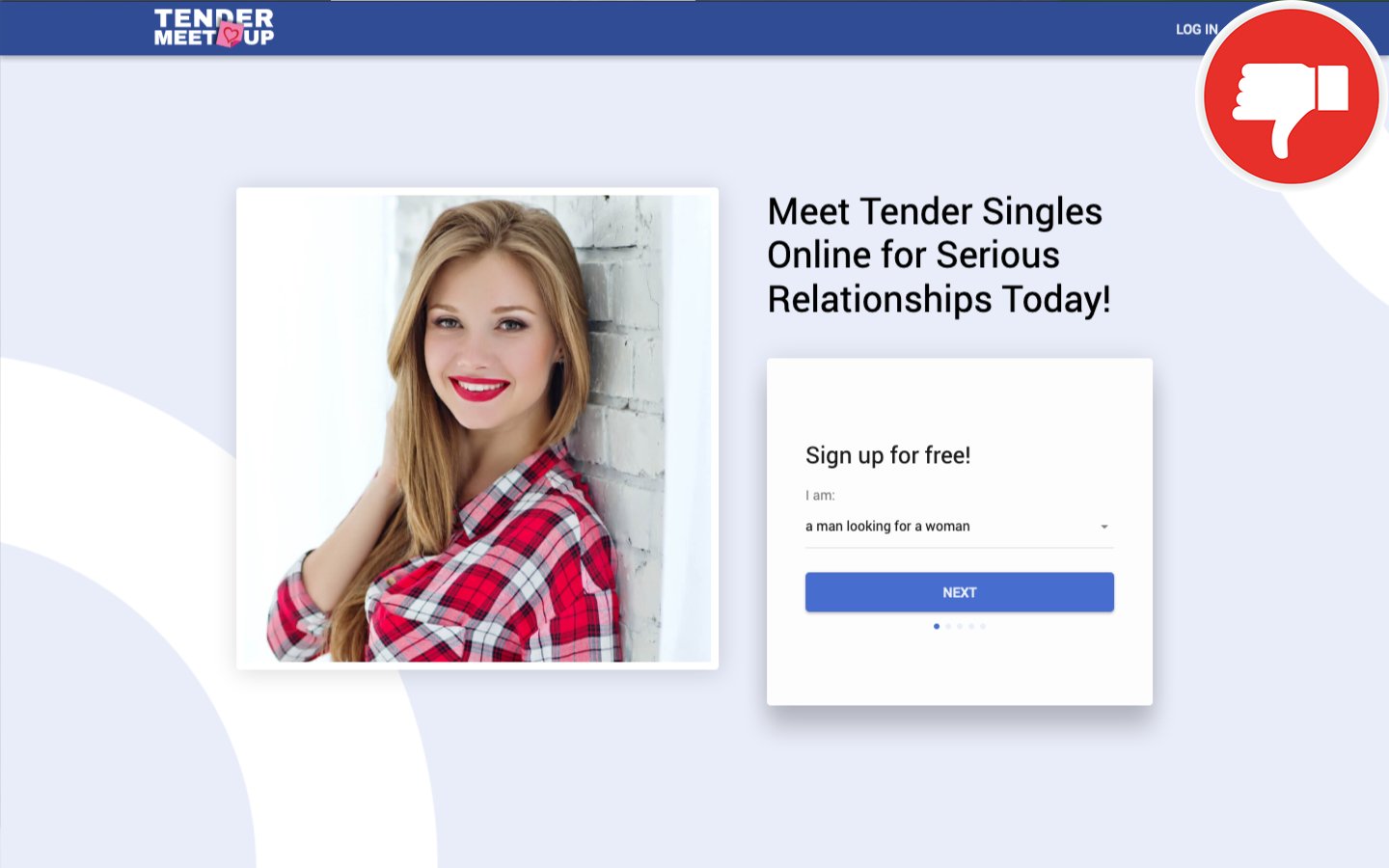 TenderMeetup.com looks nice at first, but we found many negative reviews about a scam on the internet. According to the information on the web, this site is a subscription rip-off. Plus, fictional profiles and fake chat operators seem to be used to stimulate users to make a purchase that will end in a trap.

Right after the registration, costs will occur for a paid membership which is quite expensive. The operator of the site will offer a cheap trial membership that runs for three days. That might sound like a great offer, but the deadline for termination is too short to cancel the subscription in time. Then it will extend automatically to a monthly paid membership. This site is operated by Porticato Media Ltd, who are based in London, UK.

Scroll down to read the details of our TenderMeetup.com review.

Details on the TenderMeetup.com review

TenderMeetup.com appears to be a good online dating site. On the landing page, we see the image of a young woman and the screen for registration. The registration is free and will only take a few minutes of your precious time. Then, you can enjoy the great advantages of the site, which are mentioned on the landing page.

This site claims to be a solid choice to find a match in Down Under. Thanks to this platform, you will find true happiness. The members´ pool seems to be filled with a lot of users who are friendly and welcoming. According to the information on the landing page, it will only take a short time until you make new friends and find potential matches.

Misleading advertising on the landing page

The online dating website TenderMeetup.com looks good. On the landing page, we read many nice things about the site which sound just great. The bad thing is that the advertisement is based on misleading and irritating information. The registration is free, but after that costs will occur for a paid membership. Also, the members of the site are described as friendly and welcoming.

But, according to the reviews on the internet, the members of the site are all fake. We read many reports about the site which claim that this platform is a fake chat scam. Fake chat operators lure new users into a chat for which costs will occur. Right after the registration, a free basic-membership will be provided. Also, many messages will reach a new user. But, with a free basic-membership, it is not possible to open and read messages. Also, those messages will be deleted after 24 hours.

The cheeky trick of the trial subscription

The messages stimulate a new user to pay for a premium-membership. With every single received message, the interest in buying a paid membership is increased. We must mention that proof for a fake chat is missing. The operator does not note fictional profiles or fake operators in the terms and conditions. However, the operator has a bad reputation and is not reliable. Anyway, a normal subscription for a premium-membership is quite expensive.

We read a lot of reviews about the site on the internet. In general, former users had a bad experience with this site. Also, the operator of the portal is well-known, but not for good. The company is known for a huge network of scam sites. All their portals seem to use fake profiles to lure users into a subscription rip-off.

The conclusion from our TenderMeetup.com review

The online dating website TenderMeetup.com is a subscription rip-off. Also, we found many reviews from former customers about a fake chat. According to that information, fictional profiles and fake chat operators are used to stimulate new users to get a paid membership. The trial membership is a trap. It cannot be terminated in time and will extend automatically to a monthly paid subscription.

Let us know your TenderMeetup.com experience in the comments as well.