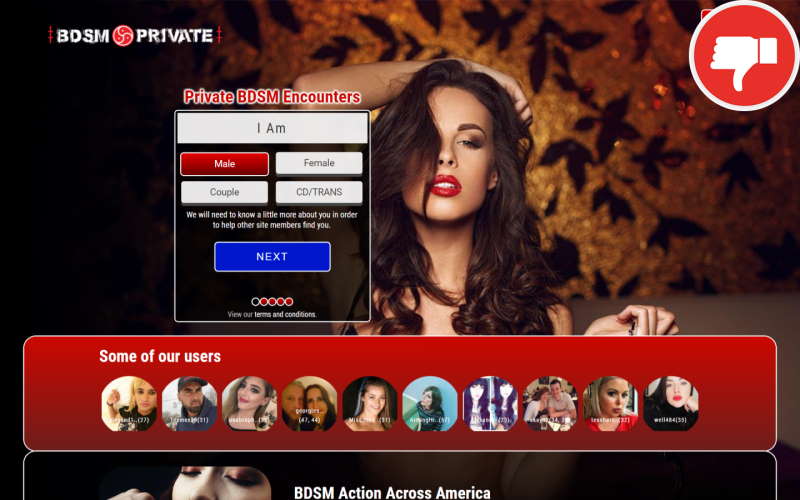 BDSMPrivate.us has got a modern appearance and advertises with an interesting offer. But, this online dating portal is a cheeky scam. On the internet, we found many negative reviews about the platform. Former users had a bad experience and noted fake profiles that are moderated. Also, costs will occur for a premium membership.

First, this website is not worth your money and time. The profiles are fake and controlled by fake chat operators. They will start a chat to animate users to make a purchase. Also, a trial membership will be offered, which is a trap. On the internet, we found many reports about a subscription rip-off. The operator of the site is Sensate Inc, which is based in Florida, USA.

Scroll down to read the details of our BDSMPrivate.us review.

Details on the BDSMPrivate.us review

If you feel impressed by the offer, registration only takes a few minutes. Plus, it is free for women and men.

Misleading advertisement on the landing page

BDSMPrivate.us claims to be a legit casual dating site. But, we did some research on the internet. This way, we found many negative reviews about the site. It turns out that it is not reliable. More, former users point out that it is a cheeky scam. We found information about fake profiles and a subscription trap. It seems that the profiles on the site show fictitious people. We checked the legal information on the site. There we found a note about fictional content. Plus, the operator admits that this site is for entertainment only.

Now, entertainment is a common synonym for moderation. It is a smart way to explain the actual purpose of the site. But, users do not suspect a fake chat. Anyway, this site will entertain you, but only virtually. In the end, this means that it is not possible to meet real people here. With regard to the legal information, the purpose of the site is your entertainment only. But, even that is not true at all. The actual purpose of moderation is to increase income for the operator. To achieve that, fake operators control the fake profiles of the site.

By using this website, you acknowledge that any User profiles, messages and communication may not be genuine.

Do not fall for the scam

It starts right after the registration. Then, a new member will receive many messages from other members. Those profiles are fake, but not marked as such. Plus. A fake operator will not identify as a fictitious person, either. In a nutshell, users do not know about moderation, which makes it a rip-off with a fake chat. By sending messages, they animate users to reply, for which costs will occur. If a purchase is made, the trap will snap close.

With regard to reviews on the internet, the trial membership on the site is a cheeky trap. In general, costs will occur for a premium membership that will extend automatically if the user does not cancel it in time. This is not possible with a trial membership. Plus, the operator of the site makes the termination of a normal subscription difficult as well. In the end, the user gets trapped into a renewing payment subscription on a site that is full of moderated fake profiles.

The conclusion from our BDSMPrivate.us review

BDSMPrivate.us is a rip off with a fake chat and a subscription trap. After the registration, high costs will occur for a premium membership, which is hard to cancel. Plus, a trial membership will be offered, which is a cheeky trap. Last but not least, the profiles on the site are fake and controlled by fake operators. They will animate users to make a purchase.

Let us know your BDSMPrivate.us experience in the comments as well.